In an attempt to find out what things employees like and dislike about their jobs and thus what is motivating and de-motivating, we asked 500 knowledge workers with full time jobs a set of questions about their work and environment. Among the questions were two that asked:

What we found was in some ways quite surprising.

For a PDF copy of this report click here: Things employees like and dislike about their jobs. 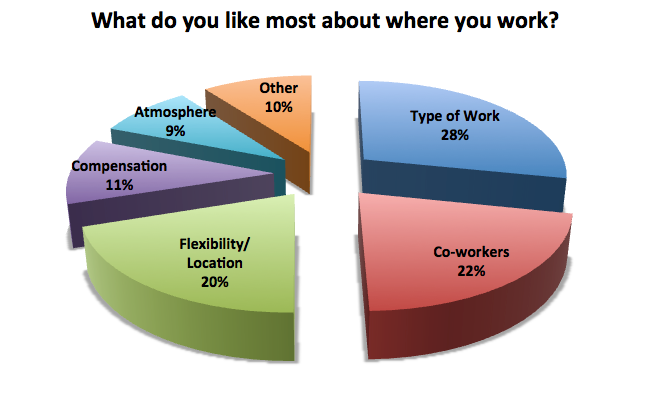 Given the lack of difference between the two groups, there is little that needs to be done differently in motivating them. The one surprising finding was that of flexibility. The number of people who felt that the thing they liked most was flexibility was greater than expected. Since this is something over which managers have total control, it behooves them to attempt to make the workplace more flexible to increase employee satisfaction with work.

When asked what things employees like least about work, they bring up the workload, management and compensation. It was pleasing to see that 13% of people could find nothing unlikeable about work. 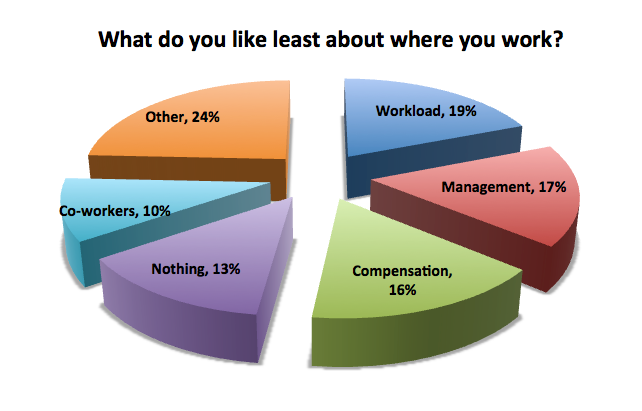 There is however a lot of difference between people who are managers versus those who are employees in terms of what they dislike.

Motivators, the existence of which lead to satisfaction

Hygienes, the lack of which lead to dissatisfaction

It is instructive to note that our research turned up less than 1% of respondents who thought that management was the thing they liked most about their work. Both the statistics we generated and the research we cited would imply that good leadership is not a motivator. But bad leadership is a de-motivator. But our research does seem to imply that the quality of relationship with one’s peers is actually a motivator.