Market Size – and why it matters

One of the first thing a technology entrepreneur should do is try to figure out market size. But why does it matter? Fundamentally it matters because it is market size which will limit or enhance the company’s growth rate. Look at Uber and Dropbox for example. Each managed to obtain a relatively small proportion of their markets but Uber, with a much bigger market, had a much bigger growth rate and ended up with much higher revenue. It takes about 30 years to reach saturation of a market for a new technology no matter what the size of the market. Simply put, a larger market will enable greater company growth. 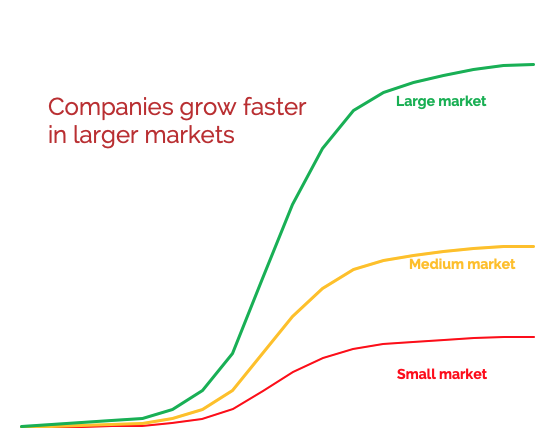 Then what is a big enough market? As we are talking about Unicorn Math in all of this, then we are talking about being big enough to be a Unicorn. A Unicorn has a valuation of at least $1 billion which according to Unicorn Math, means capital of $212 million and revenue of $125 million. Looking at the results obtained by software companies that went public in the last decade, we can figure out what TAM is enough to get a company to $125 million in about ten years. To do this we looked at over 100 companies and determined from their prospectus what their TAM and revenue was.

The average firm in this group achieved revenue in 10 years that was 0.75% of their TAM. The median of this group recorded 0.51% of their TAM as revenue. In fact, there is a pattern as to how much revenue can be achieved based upon the number of years from startup. The following chart shows that relationship. 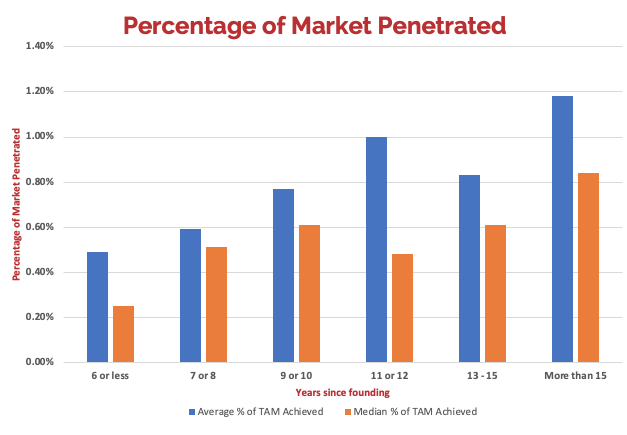 If you want to get your company to $125 million then you need a market of about $16 billion on average in about 10 years or about $25 billion using the median number. The size of the market you need now will depend on the growth rate expected for this market in the time frame you expect.