Total Addressable Market or TAM is a difficult concept to define and is frequently misused. There are actually multiple parts to the concept:

The first concept is that of the aggregated potential value of the solution or potentialeconomic value. This is a measure of the value proposition.

Potential Addressable Market or PAM includes people or companies who are or are not currently buying equivalent products but who could be.

TAM is the most important concept and it equals the current amount actually being spent for whatever you prpose to replace.

In addition to TAM, there is the concept of SOM or Serviceable Addressable Market. This is the portion of the market that you can actually serve and reach with your business.

Then there is SOM, the amount currently being spent by those buyers whose use case matches your current target market.

All of these concepts are defined slightly differently depending on who does the defining. The following exhibit shows the relationship between these items: 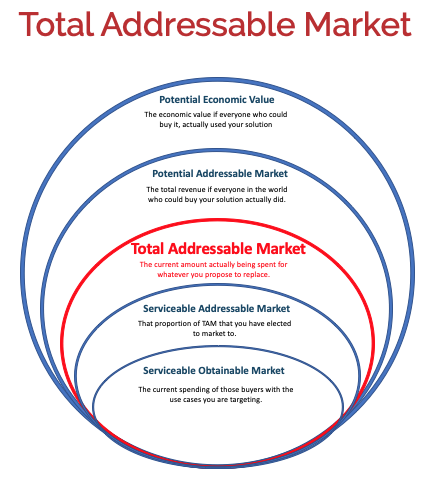 Startups frequently confuse PAM with TAM, making their market seem larger than it really is. When market research reports present TAM, they present the current value of revenue earned by companies in the market. When entrepreneurs calculate TAM, they frequently determine this by multiplying the number of individuals in a market by the average amount paid by those who purchase.