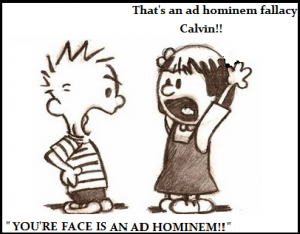 I often feel there should be rules about arguing specifically to prevent Ad Hominem fallacies in arguments. Something like the ones the Marquess of Queensbury adopted for boxing. In my fantasyland of arguing, the red card would be reserved for these fallacies.

Now I know in using the term Ad Hominem I’m committing all sorts of blogging faux pas by using Latin words but you can think of it simply as meaning “Against the Man” (or woman.) An Ad Hominem is a logical fallacy used by a cheater when he or she has no other way of winning an argument.

Instead of attacking the argument, the cheater attacks the person doing the arguing. This is actually a logical flaw in an argument that should render the argument invalid but it seldom does.

In my imaginary world of arguing I would be quick enough to be able to see an Ad Hominem across the room and render any attempt at one invalid. “Hey, that’s unfair!” I would say, “You just committed a Tu Quoque!”

But alas, I’m not that smart. I frequently find myself thinking what I should have said, if only I had thought faster. I have a term for this and it’s: “I Thought to him!”

If you aren’t any good at catching these things in flight, maybe you could learn to use them in arguments yourself. After all, if the average person is lousy at spotting a gratuitous Circumstantial Ad Hominem then maybe they are a good tool on their own.

So here’s what you should do: Review the list of Ad Hominems above and practice using them in arguments. Surprise and confound your friends and loved ones with arguments that can’t be countered. If you get really good at this you could even consider standing for election as this seems to be the prevalent technique in politics today.