Back to School Day 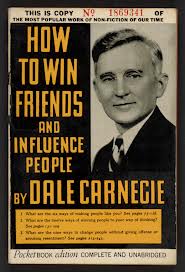 Many years ago I worked with a guy by the name of Dave Langley. He always considered the day after Labour Day as the real beginning of the new year. In many ways, I agree with him as we need to get back to work seriously now that summer has faded.

So in honour of Back to School Day I have developed a reading list for you. Over the next four days, I’ll give you four books you really should read. These are ones I’ve read recently and I think have something worthwhile to say.

Today’s book is “How to Win Friends and Influence People.” Dale Carnegie wrote the book over 70 years ago and it has sold over 15 million copies. I re-read this book recently, probably 40 or so years after I had first read it. This time it sunk in a little better.

It’s more of a bible for getting along better with other people. The one key point in the book is what Dale Carnegie believes to be the most important law of human contact: Always make the other person feel important.

This book is particularly useful on Back to School Day as it’s in the playground that you’ll have your greatest influence at work.