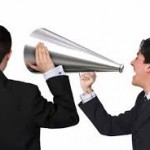 Do you ever wonder why everyone is afraid of the people in finance and like the people in HR. Well it comes down to Coercive Power versus Reward Power.

Yup, HR has the ability to reward you. This can come in the way of job assignments, pay, benefits. Good things come from HR. Even if you get fired, that’s not HR’s fault, it’s your boss’.

But finance, that’s another case. They usually have Coercive Power. They don’t have any way of rewarding employees, just of coercing them into doing things the way they want done.

In the world of power politics at the office, these two powers tend to be situational. Other groups may have the ability to reward or coerce but these are the two main culprits. These powers are almost as good and sometimes even better than Positional Power.

After all, Finance can even go so far as to tell the CEO what to do in certain circumstances.

Unfortunately though, these types of powers can’t be added to out Power Politics game of Rock, Paper Scissors as they can’t be used very often and can only be deployed in certain circumstances.