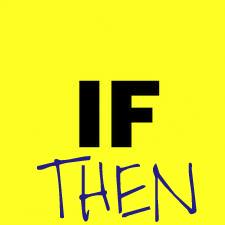 I was sitting with several people in a meeting recently trying to figure out why they just weren’t getting what we were talking about. It was one of those situations where we had had a meeting recently and made a number of key decisions. Now we were meeting to decide something else and the results of the first meeting clearly (to me at least) had implications on what we had to decide in the second meeting.

But we were effectively re-hashing the first meeting all over again. Not being very high on the emotional intelligence scale, I was getting visibly frustrated at our slow progress. And then it hit me; they just didn’t see how the results of the first meeting impinged on the second.

I’ve since been in a number of situations where I recognized the same thing occurring. One of them was in Spanish class where we were conjugating verbs and one fellow student couldn’t seem to get the pattern for conjugation of -ar verbs and how all verbs of like types have similar endings. Another “If, Then, Else.” problem.

I suppose this is the foundation of logic and reasoning. I’ve tried to figure out if an “If, Then, Else” failure is a failure in inductive, abductive, or deductive reasoning but I get a little lost in the definitions of these so I’ll leave that to another time.

Whatever it is, a person who gets “If, Then, Else” (computer scientists and engineers)  tends to get very frustrated with people who don’t get it.

Since I would rather work with people who “get it” rather than those who don’t, I’m trying to figure out how you can screen for “If, Then, Else” in an interview. I’ll add it to the list of things you want to hire for which now include: