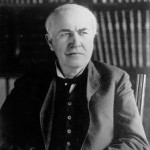 If you read anything on goal setting it will say that after you establish some goals you’ll need to make a plan. But if you look back over your life to date, can you name five really significant things that you accomplished as a result of a detailed plan?

I suspect that many of us wander through life with very loose plans, some of which may be written down but most of which reside in our minds. I have never been a proponent of detailed planning but as I wander from one objective to another I wonder if perhaps I’ve given too little attention to planning.

In one of my recent nocturnal net surfing forays (without a plan) I blundered upon a write-up on Thomas Edison. You know, prolific inventor, rabid entrepreneur, holder of 1,093 patents etc. etc.

What I didn’t know about Edison was that he was a rabid planner. Apparently he made detailed plans for every trial and faithfully recorded both the plans and the results in notebooks. While he was meticulous and scientific, he wasn’t averse to trying inspired guesswork. What was key to his success though was that as he said it “I never did anything by accident.”

So maybe the rest of us have been wrong. Maybe we’ve ended up where we are mostly through accident because we didn’t have detailed plans. Maybe if we had been better planners we would have ended up more like Edison.