Jimmy Carter – The Micro-Manager as a Leader 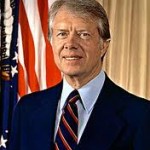 No one wants a micro-manager as a leader so it’s surprising when one actually succeds in politics and in fact becomes President of the United States. Jimmy Carter was noted in his one term of President for being just such a micro-manager and it became one of the factors that limited him to just one term.

When Carter was elected President in 1976, he proved to be a masterful campaigner. Instead of courting the party establishment, Carter ran as an outsider, capitalizing on the post-Watergate mood of the nation. He quickly developed a reputation as a “policy wonk” and micromanager. A trained engineer, Carter was undoubtedly a keen micromanager, who desired to be involved at all levels of the decision-making process, and to be aware of all the details of every issue; he had an ‘inability to delegate.’

You get an early hint of his problems, for example, when he laments that he is inundated by piles of decision papers. Instead of reorganizing his staff, he decides to take an Evelyn Wood course in speed-reading.

He was faulted for lacking the grand vision of previous presidents, and for obsessing over the administrative details of the office at the expense of seeing the big picture. It was reported that Carter once took time to resolve a scheduling dispute between staffers over the use of the White House tennis courts.

Carter himself even said: “I was sometimes accused of ‘micromanaging’ the affairs of government and being excessively autocratic, and I must admit that my critics probably had a valid point.”

For some reason, people find it hard to see themselves as micro-managers and even when they do, to change their behaviour. Ask yourself, do you micromanage and if so, can you change this?