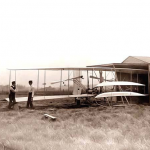 When you think of famous inventors, you often think of people working away in their labs, day after day, alone, producing failure after failure until they eventually succeed. Inventors are thus rightly known for their persistence. As a leadership skill, persistence is often underrated. When you think of Orville and Wilbur Wright, you would be right to credit them with persistence but not perhaps for the area in which they exhibited their greatest persistence, that of marketing their invention.

I’ve used this formula before in a blog and when most people think of persistence, they think in terms of coming up with a working idea. In actual fact, marketing can take much more persistence that inventing and Orville and Wilbur Wright are an excellent example of this. You might know that the Wrights made the first powered flight on December 17th 1903. In 1904, they set up an air strip in Dayton and flew every day but hardly any reporters came to see them.

With 105 flights under their belt, they wrote the US government to see if the army might be interested. The War Department responded that they were not interested in providing financial assitance until such a device  could be “brought to the stage of practical operation without expense to the US government” which they had already done.

In October of 1905, the Wrights wrote the government again and by this time they had made flights of up to 39 minutes over 20 miles. The War department declined once again with the same comments and this so discouraged the Wrights that they basically ceased flying as the Wrights couldn’t see any use for airplanes other that for military purposes.

Finally, in 1907, an employee on the Army Signal Corps who was following the early flight pioneers convinced the government to give airplanes a try. The government acting very responsibly, put out a tender and got  41 bids. The Wrights finally won the tender and were able to make a sale to the US government. their persistence had paid off but it took almost 5 years from when they made their first flight until they got their first sale.

As a leader, are you persistent or do you give up too early?