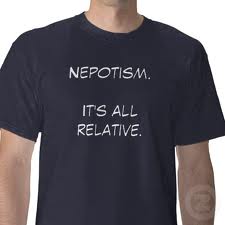 Great word isn’t it? Nepotism. I thought it was from the greek god Nepo but Wikipedia says it’s from the Latin word nepos or nepotis for nephew. On the scale of playing favourites at work, it is one step up (or down depending on your point of view) from having a Teacher’s Pet. But is it all bad?

I got my first taste of what it means when my father was President of Consumer’s Distributing and got me a Christmas job in one of their stores. My job was literally to run back and forth from the stockroom to the order desk with merchandise. And run I did, off my feet. No breaks, short lunch.

I thought the working conditions were so bad I mentioned to a few co-workers that we should try to start a union. After that, no one talked to me. Not a good idea if you’re the boss’s son. Since then I’ve lost count of how many places I have worked where there was some sort of family element involved.

I guess as in most things, it depends. It depends on whether you want to risk your own credibility and effectiveness as a leader. The penalty you’ll pay if it fails is the loss of respect of your team. And if the person is there forever, you’ve lost their respect for a long time.