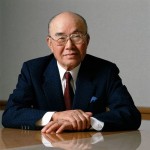 Soichiro Honda didn’t start out to develop one of the largest and most successful automotive companies in the world. All he really wanted to do was to develop a better type of piston to improve car performance.

His first attempt to commercialize his improved pistons was to offer his designs to Toyota. He was turned down quickly as their engineers didn’t even meet with him. This is where resilience came in. Not being daunted by his initial failure, he persisted and eventually did meet with Toyota, only to have them ridicule his designs. He picked himself up again and persisted, going into great detail to convince them.  Finally, he obtained an order to supply pistons to Toyota.

With an order in hand, Honda threw everything he had, money, knowledge and experience into building a plant to produce these new pistons. His new plant was quickly destroyed by an earthquake.

He picked himself up again and proceeded to build another plant which was just completed as World War II erupted. The war eventually devastated the country and with it, Honda’s plant. He had lost his factory, his money, and many of his friends but he started again. The rest is history.

Honda had the resilience to persevere in spite of numerous setbacks that would have destroyed a less resilient individual.