Some days it’s just not worth chewing through the restraints 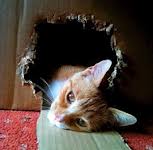 Those are the days you need goals. In the world of motivational speakers there is a story that is often told about Goal Setting.

According to this story, in 1953, researchers at Yale University (the story sometimes is about Harvard in 1979) surveyed the graduating class to determine how many of them had specific, written goals for the future. The results came back that only 3% of them had these goals. According to the story, 20 years later the researchers surveyed the class again and found that the 3% with goals amassed more personal wealth than the 97% who didn’t.

This is a very nice story of course, compelling, illustrative and inspirational but a number of people have followed up on it and unfortunately it is entirely fabricated. Both Yale University and the Secretary of the class of 1953 at Yale confirm that they have never heard of a study of the sort.

Whether or not the story is real, the point of it is, if you don’t know where you’re going, any road will take you there.