Technology is forcing accessibility but is this good? 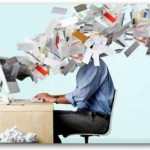 Unfortunately, technology is forcing us to be more accessible than we should be. You might have thought you had seen the end of this topic as I focussed on it in my last two blogs. Not so, I’m going to beat this one to death. I think I have to because I’ve had a few conversations with people about this issue.

Technology has given people we work with the ability to send us umpteen emails even if we’re only copied. While they wouldn’t think of phoning with the same information or dropping by to chat because that would be intrusive, email is not seen as intrusive and therefore there is no social bias against invoking it.

Look at the issue of time and accessibility. No one you work with would think about dropping by your house on the weekend or at night to tell you something. Neither would they phone you because there are social rules against this.

But for some reason there is no social stigma against sending emails at night, on weekends or when someone is on vacation. Technology is forcing you to be accessible 24/7.

What all of this accessibility means is that instead of using precious time with other people and focussing only on material things, things that matter, we are inundating our coworkers with immaterial things. We are able to copy people on anything and we are. Managers can never say “You never told me” because they’re hearing everything, even if they shouldn’t.

As a society we have become fixated on the immaterial and are missing the big picture just because people are accessible. And this accessibility is ruining people’s lives as they are overwhelmed by communications.

“They” say that being a good leader means being accessible but technology has meant that we’re now accessible for the immaterial and we are wasting our time on things that don’t matter. It has taken our eye off the ball and diluted our focus from what is really important.