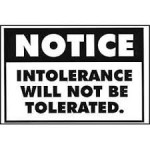 I hope you’ve been keeping up with 40 Days of Dating. It’s a very bad example of the lack of tolerance we have for others these days. If you haven’t been reading the blog, It’s the current new media darling where two good friends with opposite relationship problems who found themselves single at the same time agree to date for 40 days and blog about it.

It’s almost as if they are trying to doom the relationship from the start by expecting perfection.

Now I’m not trying to turn this blog into something about dating but the parallels to the working world are astounding. We have become much too intolerant of mistakes made by others.

The world of Six Sigma has made us jump on the smallest mistake so that many at work are now paralyzed by fear, concerned that they’ll make some minor error and be raked over the coals for it.

It has become a cultural phenomenon to point out imperfection. When Apple brings out their newest iPhone later today, watch for all the criticism they get. No matter what they do, the tech paparazzi will be all over the failings of whatever they do.

What concerns me most is where this will end. How bad with this lack of tolerance get before the pendulum inevitably starts moving back?