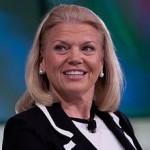 On January 1st, Virginia Rometty became IBM’s first female CEO.  She graduated as an engineer in 1979 and joined IBM in 1981 at a time when women were coming to enter the business world in droves. Along with the requisite skill, and emotional intelligence, one of the things that Rometty credits for her rise to the top is self confidence.

As reported in the New York Times: “The age group of women becoming C.E.O.’s started their careers in the early ’80s, when the huge tsunami of women were really building professional lives,” said Ilene H. Lang, chief executive of Catalyst, a research firm on women and business.”

“Yet the fact that Ms. Rometty’s gender remains newsworthy also exposes the lengths that businesses still need to go to before women who invest their careers in companies have a shot at the corner office, or even equal representation. Early in her career, Virginia M. Rometty, IBM’s next chief executive, was offered a big job, but she felt she did not have enough experience. So she told the recruiter she needed time to think about it.”

“That night, her husband asked her, “Do you think a man would have ever answered that question that way?” “What it taught me was you have to be very confident, even though you’re so self-critical inside about what it is you may or may not know, and that, to me, leads to taking risks.”