What Kind of Leader is Santa Claus? 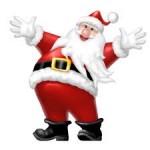 With all of the debate about leadership these days, I thought it would be useful to examine the leadership capabilities of Santa Claus. After all, he is universally recognized as  a doer of good deeds but have we ever turned a critical eye to what makes him effective as a leader?

In keeping with my new three part leadership classification system, I’ll turn first to his qualities as a visionary. In this area there are mixed reviews. He is universally acknowledged as promulgating a cogent and inspiring vision for children under the age of eight. However for the rest of the population, he just doesn’t cut it. What kind of visionary only appeals to those under eight and why does his vision not work for those of us who are past our prime? As a visionary, he is a bit of a failure for his inability to connect with those over eight.

As to his ability to make strong emotional connections, I think we must give him good marks. After all, why would we put up with all of that terrible Christmas music year after year? Even when his vision fades for those of us old enough to know better, he maintains a strong emotional force field that fuels the economy every year.

Yes, I know that there are those of you that say that Management isn’t Leadership but this is my blog so I’ll include it if I want to. As to management capabilities, he is a bit of a bust. Who among us hasn’t been disappointed at not getting that perfect gift we wanted so much? And as for being able to contain costs, this becomes an annual struggle that is usually exceeded. As for project management though, the guy is a master. All those presents delivered on time every year. Don’t we wish that Air Canada was half as good?

So there you have it, another profile of a flawed character, trying so hard to be a good leader but missing in critical dimensions, just like the rest of us.