The research is in: Women make better leaders than men

I was surprised to receive a number of comments yesterday (from men) who were of the firm opinion that women don’t necessarily make better leaders than men. But I think thou doth protesteth too much.

I went trolling for research on the subject at the behest of one reader (female) who said there is lots of research to support the proposition that women make better leaders. According to her, there are lots of studies that show that companies with more women as directors outperform companies with fewer.

The most extensive research I uncovered comes from the Harvard Business Review. They report a study of  7280 leaders using 360 degree assessments. “At every level, women were rated by their peers, their bosses, their direct reports, and their other associates as better overall leaders than their male counterparts – and the higher the level, the wider that gap grows.”

What I found most surprising was that at all levels, women are rated higher in 12 of the 16 competencies they tested that go into outstanding leadership. In case you don’t believe me, check out the following chart: 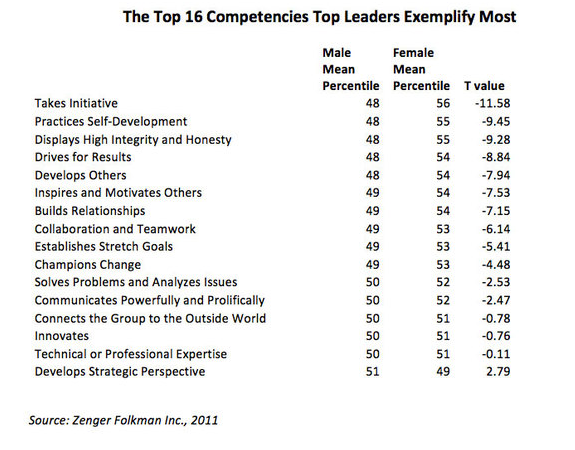