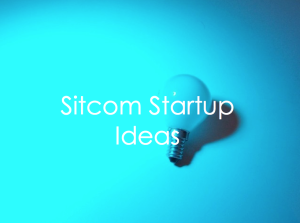 In a startup world full of ideas, it’s difficult to separate the Sitcom Startup Ideas from the good ideas. I must admit that I didn’t coin the phrase but am copying something that Paul Graham wrote in his post on How to Get Startup Ideas. To quote his post for those of you too lazy to click on the link, “Why do so many founders build things no one wants? Because they begin by trying to think of startup ideas. That m.o. is doubly dangerous: it doesn’t merely yield few good ideas; it yields bad ideas that sound plausible enough to fool you into working on them.”

And from the research I’m doing, it seems that most ideas that people start Techno with are ideas that could be classified Sitcom Startup Ideas. But there is a problem here as you could think of AirBnB as a Sitcom Startup. After all it was started by a few guys in San Fransisco who couldn’t pay rent so they put up a website to rent out three air mattresses. And Uber was started by another three guys who couldn’t stand waiting in the rain to get a taxi.

I suspect that Sitcom Startup Ideas are in the eye of the beholder. One VC’s sitcom is another’s documentary. After all, Bessemer passed on FaceBook, Google, and EBay. Not only did they pass, they ran away from these ideas and their founders as if they were nuts. You can see the list of all their epic fails here.

Paul Graham goes on to say that: “If you look at the way successful founders have had their ideas, it’s generally the result of some external stimulus hitting a prepared mind…..The verb you want to be using with respect to startup ideas is not “think up” but “notice.” “. Now I don’t want to criticize Paul Graham as he is much more successful than I will ever be but I don’t get the difference between thinking and noticing. After all, AirBnB and Ebay, were not noticed, they were thought up and then noticed.

I’m struggling to come up with a methodology of separating the Sitcom Startup Ideas from the good ones. (If I am successful in doing this maybe it will atone for my earlier bad ideas.) What I have seen as a trend is the good ideas are the things that come out of something the inventor or someone the inventor has actually talked to, would pay for in time or money. When founders stray from something someone would pay for then they risk creating a lousy idea.

And ‘someone’ is not a concept but a person, an actual living person who would put time or money towards purchasing whatever flows from the idea. I’m not married to this concept and still paying with it as it keeps me coming back to an expression I’ve been using lately: “Don’t find the problem, find the budget.”