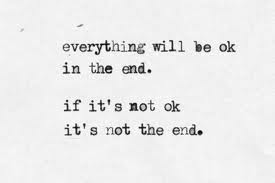 Since I wrote a post on Monday entitled If, Then, Else, I figured I should follow up that one with ‘End If’. Bear with me here for a sec and you’ll see why this is relevant and interesting (at least to me.)

In computer terms End If is the command that is used to terminate a multiple line “If” command. (Written ‘endif’ for those who like to correct my spelling.) But I’m not talking about programming here but how you know when you’ve reached the end of a task.

The best case in point is in the development of process. How do you know when you’ve finished creating a process? I’m working with a growing company called Veloxsites that has developed a platform for partially automating the production of websites for small businesses. We are growing like gangbusters these days with all sorts of new resellers being signed up.

Signing up a new bunch of resellers in a short period of time has really shown how bad our on-boarding process was. To be frank, it really wasn’t much of a process and we were probably guilty of winging it.

So being good worker bees we worked hard to document the process and to create pre-packaged Statements of Work, Project Plans etc that we could re-use so we could reduce the complexity of the reseller on-boarding.

This wasn’t hard to do and we accomplished the task of setting up the new process in rapid order. But the funny thing was that when we thought we were finished, we kept getting funny questions from resellers that indicated that the process wasn’t meeting their needs.

So we looked at this process again and decided that we were creating all sorts of artificial hoops and barriers that resellers had to go through that they didn’t appreciate. We had adopted a big process mentality when it just wasn’t needed.

What we then did was take apart the process, trying to figure out which steps added value and which ones didn’t. As it turned out, few of these steps added value so we started chopping and then we really started automating.

What we have arrived at looks nothing like where we started. We decided that we could almost entirely eliminate the process of on-boarding resellers if we eliminated stages and skipped straight to the end stage of an implementation. We could also eliminate complexity by almost entirely automating the process.

We haven’t finished yet but we are planning to arrive at a point where a salesperson can on-board a new reseller in five minutes in the middle of a sales call. We can take a process that used to take two weeks and five people and bring it down to something trivial.

We decided to “End If” the process took us no work whatsoever.