Is Urgency a Trait? 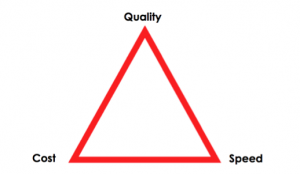 My father tells a story about driving one evening many years ago to a meeting in another town. After driving for a while, he noticed his boss’ car behind him (No surprise as they were going to the same meeting.)

After a short while, his boss passed him and zoomed ahead. When he arrived at the meeting my father asked why he had been in such a hurry. His boss replied that everything was fine until he realized that he was following my father and if he kept doing that, he would inevitably be late for the meeting.

After that exchange, my father resolved never to be late again.

Without trying to determine whether urgency is as a result of nature or nurture, I must admit that I too am obsessed by time. I can’t stand being late. I arrive wherever I’m going early, just so I can wait to be on time. (This makes me quite reliable but it is not a healthy obsession.)

At the same time, I’m not obsessed with quality or cost. These three dimensions, Quality, Cost, and Speed are the only strategic dimensions upon which a firm (or an individual) can differentiate itself from the competition.

What I’m trying to figure out today is whether this is true of everyone, whether each person can be rated on the Quality, Cost and Speed dimensions and we can say: “Yup, she’s a quality person.”

If this is true then we have a new dimension of behaviour upon which we can evaluate people. And even more, we have a new tool for matching the person to the job.

And I’ll go one step rather. If this QCS stuff is a behaviour or a trait then is it learnable? Can you take a Q person and make them an S person?

Think about it for yourself. What are you Q, C or S? And what does that mean to how you work? And can you learn to beef up the other dimensions?