Who can we blame for inventing Email? 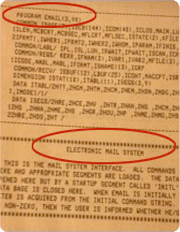 Here are some stats on its use from the Radacati Group

So there are all sorts of claims as to who actually invented it. The answer depends on how you define email.

The first attempt at something like email was back in the mid 60s on MIT’s Compatible Time-Sharing System (CTSS). Tom Van Vleck developed a “mail” command that let users send electronic messages to other users of the same system. No networking and no mail system but it was a useful start.

In 1971, Ray Tomlinson built a messaging system atop ARPAnet, the research network funded by the US Department of Defense that would eventually give rise to the internet. Ray’s system sent electronic messages between machines. Messages now, but no application. It was recognized in 1977 that  no attempt was being made to emulate a full-scale, inter-organizational mail system.

Then in 1978 V.A. Shiva Ayyadurai,a 14-year-old working in Newark, NJ built and copyrighted a software program called “email”. This was the first program to structure electronic communications in a way that mimicked paper mail with “inboxes” and “outboxes” and “address books.” Ayyadurai who is now a lectureer at MIT was at the tender age of 14, working at the University of Medical and Dentistry of New Jersey.

You can check out his claim at www.inventorofemail.com/

And yes, that invention that you probably hate but can’t live without was invented by a 14 year old.