Since I can’t get away from the topic of meetings I might as well give in and continue in the same vein. In answering a reply to Monday’s post I had a brain wave (or maybe it was a brain fart.) Whatever.

In any case,  I wondered what would happen if we just eliminated internal meetings for some arbitrary period of time as an experiment. As necessity is the mother of invention, I wonder what new solutions people would come up with in order to meet the objectives that had previously been accomplished in meetings.

So here is your challenge. Try doing a way with meetings for a week and tell me what you did to get the same work done anyway. 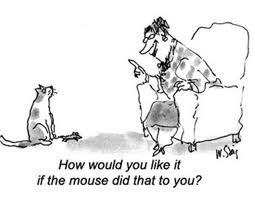 After last week’s post on 10 ways to show lack of respect, I was asked a simple question. How do I gain someone’s respect? I pondered that question all weekend and am not sure yet that I have the right answer.

To gain respect, you could do the opposite of what I posted in Friday’s blog but I don’t think that is enough. I think the way to get and keep someone’s respect is to have empathy.

Empathy is a confusing concept, sometimes described as “intellectual identification with or vicarious experiencing of the feelings, thoughts, or attitudes of another” and other times as “the capacity to recognize emotions that are being experienced by another sentient or fictional being.”

There is a big gap between being able to recognize emotions to being able to identify intellectually with them to actually vicariously experiencing others feelings.

Let’s say then it is a continuum. On one end of the continuum you are a narcissistic psychopath. In the middle you are able to recognize and identify others emotions and at the far end, you are reduced to blubber on a regular basis because you spend too much time vicariously experiencing others feelings.

What is key, no matter where you are on the continuum is to actually take others emotions into account in making decisions. I think that will earn you immeasurable respect.

10 ways to show lack of respect 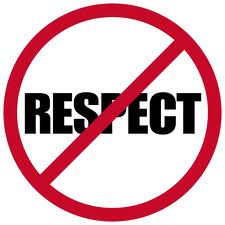 We all know how to show respect don’t we? Well just in case there is someone you want to piss off by showing a lack of respect, I thought I would give you a primer.

If you get very good at this you’ll even be in the running for office bully.

My Two Cents Worth 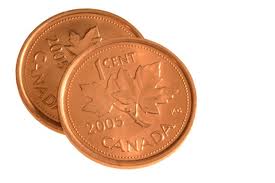 If your thoughts used to be worth two cents (inflation adjusted from the days when people paid a penny for your thoughts) what are they worth now?

After all, two cents in cash exchanges will now be rounded down to nothing.

Obviously we need some innovation in trite expressions:

“The reasonable man adapts himself to the world; the unreasonable one persists in trying to adapt the world to himself.

Therefore all progress depends on the unreasonable man.” 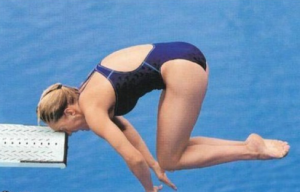 In case you’re worried about one of your plans turning into an epic fail, take heart, you’ll be in good company. Here are a bunch of epic fails.