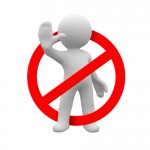 A friend of mine is pregnant (no, it’s not my fault,) and she told me last week that she is constantly being hounded by the Pregnancy Police. Don’t eat this. You shouldn’t be doing that. Are you getting enough sleep?

When she has the baby, she’ll be told a whole set of new things by the Baby Police as to how to raise the child.

This is a huge case of “Do as I say, don’t do as I do.” We’re very good at telling others what to do but seemingly poor at doing what we know we should be doing ourselves.

And yet we expect our leaders to be paragons of virtue. We expect them to behave impeccably at all times. We no longer tolerate leaders who say “Do as I say, don’t do as I do.”

Perhaps we need to cut people a bit of slack because if we expect perfection from our leaders, we’ll scare away imperfect candidates who might have something to contribute.