Leadership and The Occupy Movement 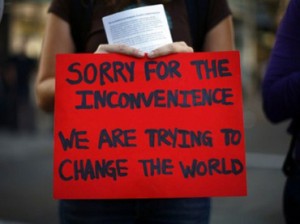 Today is the first anniversary of the day that Occupy Wall Street took over Zuccotti Park and the Occupy Movement was born. As a movement it began over a growing disillusionment about income inequality and corporate greed. While it dominated the world’s attention for many weeks, its impact was short lived. Eventually it lost its momentum, its ability to organize, and was broken up.

What doomed the movement was its lack of leadership. Not only did a credible leader not emerge but in fact the movement resisted any attempts by individuals who wanted to lead it. “Without leaders or specific demands, what started as a protest against income inequality turned into an amorphous protest against everything wrong with the world.” (Washington Times”)

Movements and groups need leaders. Where would the civil rights movement have been without Martin Luther King, the feminist movement without Germaine Greer?