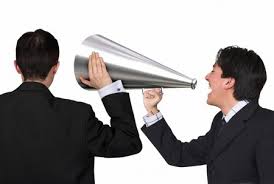 I was talking to several people (which I do from time to time) and heard two great stories about companies whose communication with staff is exemplary. In the research I’m doing, this is coming across as one of the biggest complaints that people are having, employees don’t know what’s going on in their own company.

The first is Canadian Tire. They go out of their way to make sure everyone is singing on the same song sheet. Every week, every person has a sit-down meeting with his or her manager to review what’s going well and what’s not working. It’s informal but a useful checkpoint. On a monthly basis, the meeting is formal with metrics, objectives, and results all reported in  writing and discussed.

On an as-needed basis The Tire gets everyone together to announce what’s going on before the rest of the world hears about it. For their recent Olympic announcement, they had a big get-together and party so that staff didn’t hear about this exciting new initiative in the press.

The other company is Blackberry. According to a very engaged source, Thorsten Heins started a new tradition of sending an email update to every person on the company every month just to tell them what”t going on. Apparently the effect is to make many people have a much tighter bond with the company.

It’s so easy to communicate but so often forgotten.