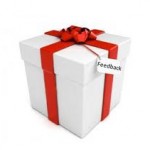 I feel like I’m opening up another can of worms in this subject of being open to feedback. For some reason, I am continually finding things that are normally seen as simple in the blogosphere are really quite problematic.

Case in point: Today I was having a tea with Joe Wilson, a colleague from MaRS days. He was talking about the feedback entrepreneurs get about their business and when should they listen to the feedback and when shouldn’t they? It’s one thing to be open to feedback but as I questioned yesterday, who should you listen to and then today I’ll ask the question: What Feedback Counts?

Many years ago when we were starting Synamics we got a piece of advice from Bob Ferchat, the CEO of Nortel that we should learn to swim in our own bay before going out in the big lake. What he meant was learn to make it in Canada before going to export markets. Worse piece of advice I ever got as it impeded our growth for years. We were open to feedback and we were listening to the right person but should his feedback have counted? In retrospect I would have to say no.

Unfortunately I don’t have an answer for what feedback counts and I’m not sure I ever will. All I’ve learned in the past few years is that it’s not all about the logic. You need to listen to your gut as well as your mind. If they both say listen then do. If either says don’t listen then don’t.