What I wish I had learned earlier as a manager

It is never too late to learn and Michael Caron reflects back on what he wishes he had learned earlier as a manager.

If you’re getting this in an email, you can watch the video by clicking on the link that will take you to the blog directly.

No one can do it as well as I can

If you’ve ever said this then you’ve doomed yourself as a manager. Lea Cameron explains her perspective on doing things yourself.

In case you need to be reminded, saying thank you is one of the most powerful tools in business. Listen to Anne Avery on this subject.

Is saying “Fcuk” at work a Leadership No-No? 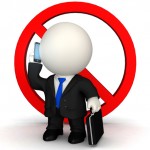 There is a great debate in the Globe and Mail today about whether Yahoo’s fired CEO, Carol Bartz should not have used the word “Fcuk” at work. (You’ll have to read the article on page B14 as I can’t find a link.) “Using profanity on the job can make you look unprofessional – but it can also be a good motivational tool.” Apparently it’s no good in a job interview (who knew?) but good for women to use to put men at ease. (What? It doesn’t put men at ease, it just titillates us.) It’s good in some areas of the world, not so good in others, it works in some industries but not in others. It can diffuse tense situations but make others more tense. Huh?

OMG, what is the world coming to when one must worry about a well placed “Fcuk” every now and then?  The next thing you know they’ll be putting in a “No Touching” rule, banning Filterless Fridays, and putting the kibosh on Topless Tuesdays. (Please note that I finally agreed that Topless Tuesdays was not mandatory but optional at work.)

Given the predilection to create employment standards I can envision a day when HR departments the world over have to develop policies around the use of the term “Fcuk.” In an effort to help the development of such policies, I have prepared the following rules:

Policies regarding the use of the word “Fcuk” in the workplace.

I’m sure we can generate all sorts of other rules so here is your chance. If you have any other rules about the use of the word “Fcuk”, please send them to me via comments. (Please avoid the use of profanities in your comments though as I have tender ears.)

Some time ago I subscribed to Harvard Business Review (for the umpteenth time), just to get a collection of articles called Leadership Insights. The first in the collection is a reprint of Henry Mintzberg’s “The Manager’s Job”. If you haven’t read it recently, it is worth a re-read. Based on a review of research into how manager’s spend their time it debunks a lot of old folklore and although it was first written in 1975, is still applicable today.

What struck me the most was at the very end of the article. In it Mintzberg states that management schools have done”an admirable job of training the organization’s specialists – management scientists, marketing researchers, accountants, and organizational development specialists. But for the most part they have not trained managers.”

And Now Time For a Rant

It’s sad to think that 40 years after Mintzberg first published a book on this subject, we are still not doing a better job training managers. This training is still not happening in MBA programs for the most part and few companies are doing it well. A friend told me that she is studying for an exam to enable her to become a Certified Meeting Professional. If there is a course for meeting professionals, just as there is for Corporate Trainers, Project Managers, Aestheticians, and a host of other disciplnes, why is there no course or certification for managers, something that 10s of millions of people do worldwide?

How do you impact your direct reports?

Back to the Futurestep survey I mentioned last week. This survey looked at something it calls consequential impact which is essentially your ability to get things done through others. Whether you manage people, projects, products or process, you’ll need to get things done through other people. The question the survey attempted to answer was what skills are necessary for you to have consequential impact on your own direct reports. No surprise here but your ability to motivate others and integrity and trust were the most important characteristics. As you move away from being an individual contributor to being a manager of people, such things as problem solving become less important than motivating your direct reports to solve the problems themselves. 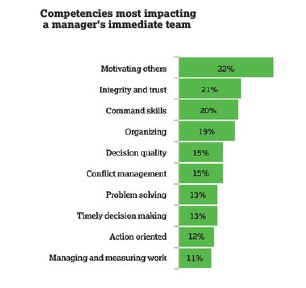