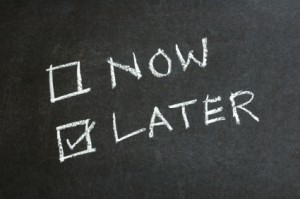 I have a friend who considers herself to be a terrible procrastinator and yet she is one of the most productive people I know. If you look up stuff on procrastination online, you’ll get all sorts of information on how bad it is to procrastinate and how you can overcome this horrid tendency in 5 easy steps.

First lets look at what procrastination is. Various sites define procrastination as “the practice of carrying out less urgent tasks in preference to more urgent ones, or doing more pleasurable things in place of more pleasurable ones.” It is also defined as “the act or habit of procrastinating, or putting off or delaying especially something requiring immediate attention.” “To postpone or delay needlessly.”

Now this friend of mine fits the bill to a T. If she has something that just has to be done for work and she doesn’t want to do it, she’ll do anything else instead. When she should be working the weekend on a report, she’ll spend the time tidying her place, cleaning, doing errands, laundry, almost anything other than doing the report.

If you notice the definitions of procrastination and the description of my friend’s activities, you’ll notice something interesting. Procrastinators are not people who do nothing, they just happen to do things in an order that would seem to be counter-productive, less important before more important.

And when I look at it that way, procrastination doesn’t seem all that bad. You’re still getting stuff done, just perhaps not in the order that would seem to make sense.