The Benefits of Procrastination 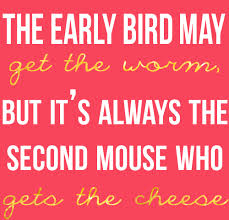 Apparently, there are three types of procrastinators, Delayers put things off for all sorts of reasons, Perfectionists don’t let go of something until it is perfect and Distractibles are people who are easily distracted by bright shiny objects.

No matter what type of procrastinator you happen to be, most people seem to feel some form of guilt, anxiety, dissatisfaction, depression or self-loathing when they procrastinate.

Silly, silly, silly. This must be something like left-over guilt from toilet training when one is young. After all, if you aren’t late at delivering something you promised,who cares if you did it at the last minute or weeks ago? Why do we think it is better to do things early that to do it late. After all, what does it really matter when you do it, as long as it is of acceptable quality and on time?

In fact the way I think about it, there are a bunch of benefits to procrastinating when trying to do something:

So it’s time to take off the shackles of unwarranted value judgements designed in the Victorian age to benefit the early bird who gets lots of worms. Stop feeling guilty about doing things at the last minute. Who really cares when you do something?