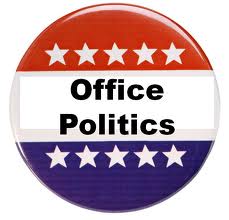 A colleague of mine once remarked that office politics in universities are so intense because the stakes are so small. Same too for companies except in some cases the stakes grow and the battles simmer.

Another friend recently reported that she’s in the midst of a big political battle and this got me wondering about the source of politics, the role that the organization plays in fostering politics and what politics are to begin with.

Having not spent much time in big organizations I had to do some serious thinking about what politics really are and I’ve decided that it’s an attempt to gain power so that one can do one’s job. Wikipedia says that it’s the use of power for the pursuit of self-interest without regard to the effect on the organizations ability to achieve its own goals.

When people have to fight for resources including funding, personnel, authority and even attention to get their jobs done then politics will break out. The fight isn’t one to gain personally but to gain by achieving their own organizational objectives. That’s why the organization is at fault. It has created an environment where people have to battle internally to do their jobs.