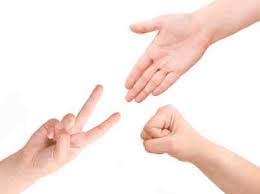 I’m so excited. I’ve been trying to figure out all week how to play Rock Paper Scissors with Power Politics and I think I’ve figured it out. (Those who know me well know that I actually used Rock Paper Scissors in my divorce agreement as a method to settle future disputes.)

If you’ve been paying attention this week, I’ve gone through the major types of power that exist in the workplace, Positional Power, Expert Power, Coercive Power, Reward Power, Referent Power and so on. The problem is, I couldn’t figure out what to do about the use of these powers. And I’ve finally figured it out.

You can turn Power Politics at the office into a game of Rock Paper Scissors. The thing is knowing what beats what. Let’s look at the three main sources of power, position, expertise, and likeability (referent power).

The thing is that most people see positional power as the ultimate source of power but it isn’t. We know that a bonehead with a title can override an expert. And that ultimately, it doesn’t matter how much you’re liked if there is a respected expert telling you what to do.

But what I just realized that someone who is likeable can often get more done than someone in a position of power. When we have a boss we don’t like, we’ll often go out of our way to ignore or sabotage trivial edicts. But we’ll do lots of unnecessary things for someone we like.

So that’s it. Position beats Expert which beats Likeability (Referent) which beats Position.

The best thing about playing Power Politics like this is that you don’t both have to declare at the same time. You can wait until they’ve displayed their base of power before you pull out one of yours that trumps it.