Meetings make you stupid (according to the research) 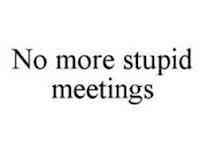 I hadn’t intended on focussing on meetings this week but I got two replies to Monday’s post and thought I should at least weight in with some useless research on meetings. I found an article in the Telegraph that says it all.

“Meetings make people stupid because they impair their ability to think for themselves, scientists have found.

“The performance of people in IQ tests after meetings is significantly lower than if they are left on their own, with women more likely to perform worse than men.

“Researchers at the Virginia Tech Crilion Research institute in the US said people’s performance dropped when they were judged against their peers.”

So it’s conclusive. Meetings aren’t stupid, only those who attend.