Nenshi for Mayor (of Toronto) 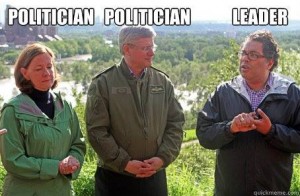 As I watched Rob Ford talk yesterday about the Great Toronto Flood I couldn’t help but compare him to Naheed Nenshi. (Smaller city, bigger flood.) Without trying to bash Ford as there are enough people to do this, I tried to figure out what makes Nenshi such a good leader.

They were both elected at the same time and there are quite a few people out there wondering if the two cities got their mayors reversed. After all, Toronto is a really cool place isn’t it and Calgary is just a hick town? So how did we get the hick as mayor and Calgary got the social media savant?

The thing about Nenshi is his ability to communicate. He stayed awake during their crisis, keeping Calgarians informed. He was online, constantly tweeting. Throughout the crisis he looked in control, he looked calm and competent.

And I think that’s the key to his latest performance. He made Calgarians feel safe in a time of crisis. If leadership is a lot about emotions then he displayed exactly the type of emotions needed in the situation.