If you’re a manager, why are you working such long hours? 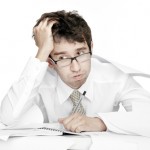 Did you know that we’re working more but getting less done? The average work week has increased from 35 hours in 1970 to 46 hours in 2012 and three out of four Americans feel stressed at work and one out of four say that work is the most stressful part of their lives. We’re working longer hours but are we more productive?

What is the effect of these changes? Check out this post with a great infographic that Keri Damen sent me.

If you’re a manager, your job is to get things done through other people.

If you’re doing a good job delegating responsibility and authority, there is no reason to work long hours. In fact if you are working too long you probably aren’t doing your job properly.

Working long hours means that either you are doing things yourself which is a no-no as a manager or you haven’t delegated enough authority to the people working for you. In either case, you’re not being an effective leader.

Don’t forget. Your job as a leader is to set the vision, communicate and motivate. Your job doesn’t actually entail doing any work yourself. So why are you working such long hours?