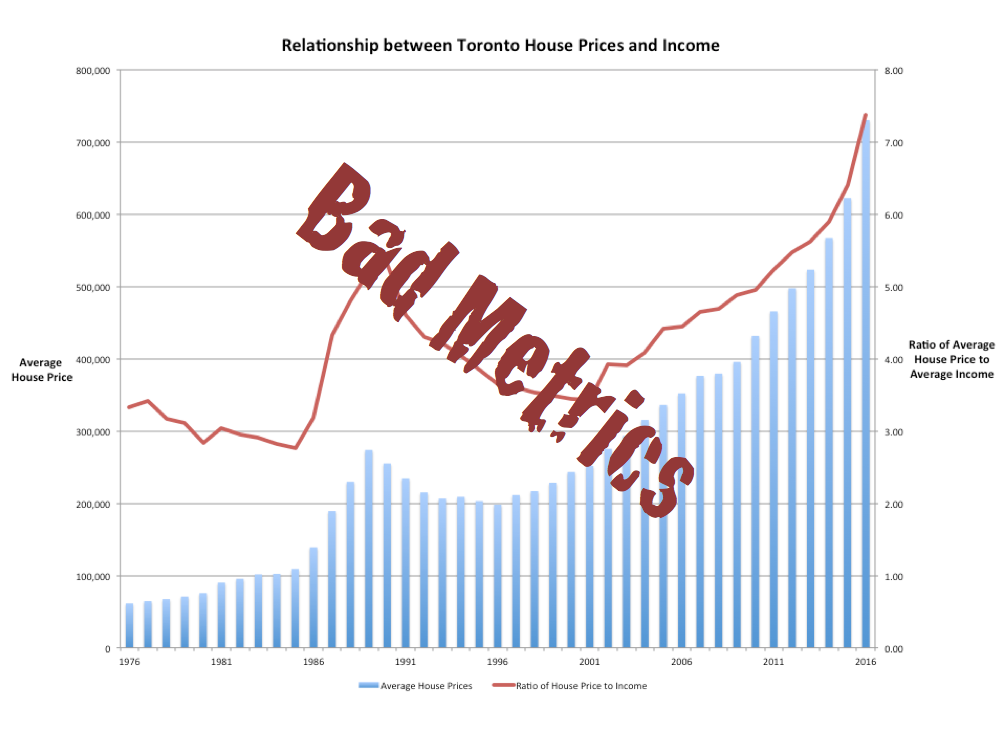 There has been a lot of talk recently about Toronto’s housing bubble. In fact, I think if you check, the talk has been filling up the press for several years. Well if all of these people are right about the bubble, when is it going to pop? I don’t think in fact that there is much of a bubble, I just think it is bad metrics. (I can feel you getting all excited out there…”oh, goody”, you’re saying, “we get to talk about metrics.” Calm down there, let’s not get too excited.)

Let’s look first at the common metric used to declare there is a housing bubble. That metric shows the relationship between the average house price and the average income earned. You can see that ratio demonstrated on the lovely graph I created showing data for the city of Toronto.

Going back to 1976, the graph shows the average house price in blue and the ratio between house prices and income in the red line. It looks just terrible doesn’t it? This is the metric that everyone is using to show a bubble.

Unfortunately in the land of metrics, comparing house prices to income is just silly. What matters isn’t the price of the house but what you pay on mortgage to own the house. So there is another factor which is left out of the bubble analysis and that is interest rates. I’ll explain how that all works in tomorrow’s post.

Meanwhile, I saw an article on the weekend with even sillier analysis. BMO has done some extensive research (I think they actually just played with Excel one day) and come up with the claim that even Toronto’s 1% are being priced out of the housing market. You can see the article summarized in Huffington Post.

On this basis they could, according to BMO’s statistics, afford a house worth $1.45 million, well above the $1.2 million average.

I know you’re finding this to be exciting stuff so tomorrow I’ll show you a better metric to use when evaluating the housing market and you’ll see why the bubble everyone claims might not be quite as alarmingly large as everyone thinks.