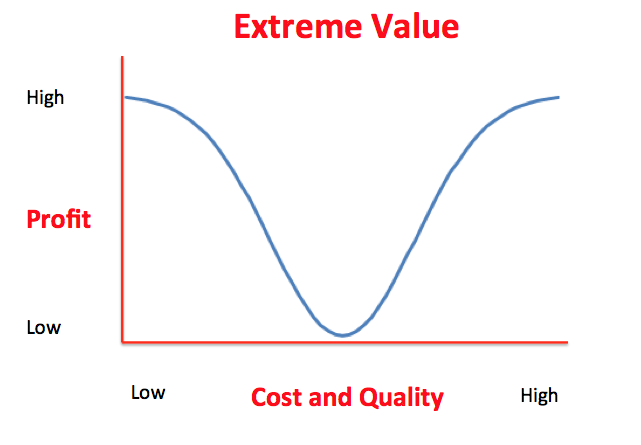 I was thinking the other day about extreme value as a result of reading a blog about which retailers will survive when the middle class is eliminated. You can picture them. They are the Saks, Nordstrom,  Tory Burch, Tiffany’s, Versace and John Varvatos of the world.

While luxury retailing continues to grow , mid-priced retailers are struggling. Abercrombie & Fitch, Aeropostale, American Eagle, Ann Taylor, J. Crew and the Gap as examples of brands which are struggling to differentiate and prosper.

I don’t think that this is particularly due to the loss of a middle class though but of a polarization in business strategy. Product developers and retailers have found that the most money is to be made delivering extreme value. As we get more sophisticated, the tendency is for us as consumers to search out products and services that add value to an extreme degree on one dimension of the quality, cost, speed triangle.

Consumers are tending now to look for extremes in value, sometimes in quality and other times in cost and it really doesn’t matter which socioeconomic group one is in. The best business strategies are exploiting those extremes.

The same thing is occurring in politics. As you look at the US primaries, several candidates on both sides, Trump and Carson for the Republicans and Sanders for the Democrats are exploiting the voter search for extreme value.

Extreme value hiring is also in full force with companies outsourcing to get the lowest cost on one end of the continuum and paying exorbitant salaries for talent on the other end.

This is happening because we have moved from mass marketing to highly differentiated, highly segmented markets. You can differentiate on both ends of the extreme value curve but not in the middle.

So how does this apply to work? Well if you want to be successful, you had better be defining yourself on the talent end of the extreme value curve. If you don’t then you’ll eventually be outsourced as employers will look for extreme value on the cost dimension when faced with an average bunch of prospects.